As an HR professional, I have the opportunity to meet with employees when they’re about to make their exit in favor of what they think is a better opportunity. Another company has convinced them that their grass is much greener. But is that really the case? It might be for some people, but many quickly realize that their new company is simply spray-painting their grass green.

Why are we always looking for the next best thing instead of watering the grass we have?

We all have a lot of choices when it comes to our careers. The problem with having choices is that they make us restless. We can’t be satisfied with what we’ve got because we’re always wondering about the next big thing or our next big position or title.

When I started my career, I had high expectations for myself. I needed to be the best, and I needed to break the glass ceiling as fast as I could. I wanted to be important and make a lot of money. I took my first job because that was promised to me, and I knew a lot of people were seeing success. When I didn’t see success as quickly as I thought I would, I pointed the finger at everyone but myself. At lunch, I found myself having conversations with peers about how the company had failed me. It was the company’s fault… it couldn’t be me. I was determined that the grass would be greener somewhere else, so I left.

A girl who was in the same role as me when I left now manages a team and brings home a TON of money. She has exactly what I wanted, but I convinced myself it was impossible to obtain.

In my next role, I saw success quickly.

I moved from sales to recruiting, and then I became team lead. I wanted to be a manager, and I saw the light at the end of the tunnel. Finally, I would reach the position I thought I deserved! But when someone else got promoted first, the rug was pulled out from under me. I became bitter, shut down and once again pointed the finger at the company because I thought they weren’t doing things right. I didn’t want to wait until I actually deserved the promotion, so there I was again, going to find greener pastures somewhere else.

Three months after I left, I found out that they opened another management role, and someone with less experience got it because I couldn’t get out of my own way. I’d left a company where I had it good and joined one where everyone was too scared to even send an email and no one had been promoted in five years.  What had I done? After all of my hard work and time spent in my professional career, I was onto another job starting at ground zero.

When I started my role at Townsquare Interactive, I knew I had chosen a great company with a lot of potential.

The company was young and growing fast. My new job didn’t come without doubt in my first year, however. I was recruiting people to work for a website company that didn’t have its own website. We had our growing pains, and my job was far from easy. During this time, Bank of America reached out to me and tried to get me to come work for them. An established company with no growing pains… and they wanted me! At the time, all I could think was, “Man, their grass is GREEN.”

But was it? Why did I think that? How did I know? They laid off my friend twice. They make their employees wear suits. Why was I thinking about running?

It’s “the grass is always greener” syndrome. It’s in our DNA to be curious and think about the “what ifs.” Human nature has us sticking our head through the fence because the grass looks greener on the other side. Is it really, though? Or are we looking at it through rose-colored glasses? The grass under our feet appears brown because we’re filtering it through our own experiences, but are people on the other side of the fence thinking the same thing? How does our perception change when we’ve been in a job for what seems like a long time, we haven’t received a promotion or our coworkers are saying they’re unhappy and you start to think you are, too? Negativity is contagious after all.

“Many of life’s failures are people who did not realize how close they were to success when they gave up.” –Thomas Edison

Frankly, we lack grit in society today. Some people double their efforts when most of us head for the door. The ability to pursue a goal and persevere through rough times is an important indicator of achieving success. Grit is a better indicator than talent. No matter how talented you think you are, if you don’t put in the work and are always looking for greener grass, it will take you much longer to be successful.

Getting to where I am took me finally realizing I had to persevere instead of run. I wasn’t taking the time to look at what was in front of me. There were so many opportunities for growth, and I worked with amazing people, but I was choosing not to see them that way. I lacked grit.

I finally decided to water the grass under me. I said no to Bank of America. I also patched up the holes in my fence so I could no longer see the other side. I stopped focusing on the “what ifs” and thinking somewhere else could be better, and it felt good! I withstood the hardships and didn’t give up. For the first time, my career took off and I reached the goals I had put into place during my first job. I now truly understand what it means to have grit. Where would I be if I had left? 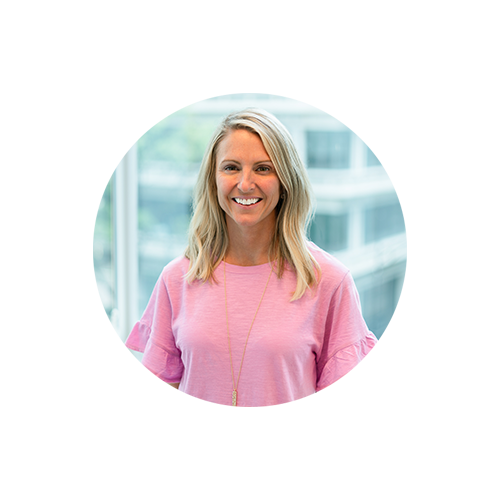 About the Author | Heather Hagar
Heather grew up in Asheville, NC and moved to Charlotte to go to college.  She attended UNCC and graduated with a Bachelor of Science. Heather always thought her career path was going to be nursing, but she found the digital space and hasn’t looked back. She loves spending time with her husband and two beautiful girls, hanging out with friends and aspiring to be a master sommelier… one day.

Tagged:
What the Heck Is a Blog?
Love Your Craft | Captain Max Patterson